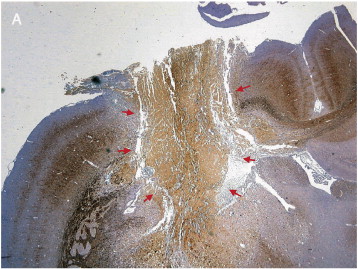 Recent experimental data have shown that hyperbaric oxygen therapy (HBOT) was associated increased Bcl-2 expression at the injury site that correlated with reduced apoptosis. We hypothesized that HBOT mediated enhancement of Bcl-2 expression and increased intracellular oxygen bio-availability may both contribute to preserve mitochondrial integrity and reduce the activation of the mitochondrial pathway of apoptosis. For this purpose, a cortical lesion was created in the parietal cortex of Sprague–Dawley rats by dynamic cortical deformation (DCD) and outcome measures in non-treated animals were compared with that of HBOT treated rats. Morphological analysis showed a profound reduction in neuronal counts in the perilesional area and a marked rarefaction of the density of the axonal–dentritic network. In treated animals, however, there was a significant attenuation of the impact of DCD over perilesional neurons, characterized by significantly higher cell counts and denser axonal network. In mitochondria isolated from injured brain tissue, there was a profound loss of mitochondrial transmembrane potential (ΔψM) that proved to be substantially reversed by HBOT. This finding correlated with a significant reduction of caspases 3 and 9 activation in HBOT treated animals but not of caspase 8, indicating a selective effect over the intrinsic pathway of apoptosis. All together, our results indicate that the neuroprotective effect of HBOT may represent the consequence of preserved mitochondrial integrity and subsequent inhibition of the mPTP and reduction of the mitochondrial pathway of apoptosis.